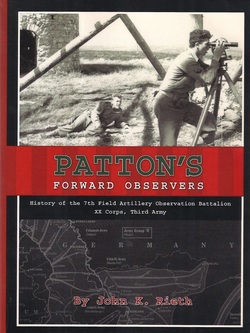 Soft cover, 225 pp, 32 photographs and 8 maps
ISBN: 1-883911-62-1,  List price:  $23.95
In 2001, the US Army’s 7th Field Artillery Observation Battalion Veteran Association (then about 40 members strong) asked John K. Rieth to write a history of this storied unit.  John, then an active duty Lieutenant Colonel with the US Army, was the son of Kurt A. Rieth, a battalion veteran (1943 – 1945) who had passed away in 1985.  With a keen interest in military history, John took on the project which involved collecting hundreds of oral and written accounts from the veterans and family members, all of whom were eager to see the Battalion’s legacy carry on to future generations.  John was able to prepare a first draft of the book within a year, which enabled every veteran of the unit who was alive at the start of the project to obtain a copy.  In 2004, an enhanced and professionally edited version of the original project titled Patton’s Forward Observers, was published by Brandylane Press, of Richmond VA.   Sadly, as of 2015, very few of the 7th Field Artillery Observation Battalion (7th FAOB) are still with us.  However, their service, deeds and wartime journey lives on in Patton’s Forward Observers.
Patton’s Forward Observers provides a rare telling of the art of counterbattery operations in the Second World War.  Beyond the technical aspects of this specialty of artillery observation, this book conveys the voices of highly trained artillery observers who fought every step of the war with Patton’s famed Third Army.  Formed on the eve of the attack on Pearl Harbor, the 500-man 7th FAOB was assigned the hazardous task of determining the source of enemy artillery fire.   Serving in the very front lines, these troops used state-of-the-art technology to mathematically triangulate where German guns were shooting from, and then directed the return fire of US artillery to silence them.  It was dangerous work that placed the forward observation posts at great risk from German artillery fire, patrols, counterattacks and ambushes.
The 7th FAOB had already been in existence for three years before it deployed to Europe in early 1944.  This prolonged training period, uncommon to US Army battalions in the Second World War, prepared the 7th FAOB well when it first went into action in Normandy in July 1944.   Serving as Third Army’s XX Corps (the Ghost Corps) primary counterbattery unit, the battalion was dispersed throughout the entire Corps front for the duration of the war.  The 7th FAOB was at the vanguard of the breakout in Normandy and the Third Army’s stunningly quick advance through France in August 1944.  When the ferocious German defense of Metz and the Saarland stopped Third Army in the bitter Winter of 1944-1945, the 7th FAOB participated in some of the bloodiest, yet least published fighting of World War II.  In March 1945, XX Corps finally broke through the seemingly impregnable German West Wall, as elements of the 7th FAOB crossed the Rhine, plowed through the German heartland and ended the War in Hitler’s birthplace in Braunau, Austria.   Patton's Forward Observers is ultimately a soldier's story, and one that contributed to the Patton lore that lives on today.

-- “John Rieth has mastered an amazing amount of detail…and woven it into a lively tale of citizen soldiers in the most deadly war of the Twentieth Century.”  Ed Ruggero:  Author of Combat Jump; The Young Men who Led the Assault into Fortress Europe, July 1943.

-- “This much researched volume provides insight into the lives we lived and lost.”  Charles J. Wright Jr, Veteran, of the 7th Field Artillery Observation Battalion and President of the 7th FAOB Association.

--  “John Rieth has masterfully woven the touching humanity of boys growing up in a hurry in the crucible of war and the fascinating details of artillery forward observation in a terrific book……An immensely enjoyable read!”  General James T. Hill, US Army (Ret.), former Commander, US Southern Command.

-- “While I've read many books on WWII, this book surprised me with information about the detailed surveying, flash and sound observations and measurements that were a very important part of suppressing German artillery. The book had a good mix of historical place setting, technical information, and personal recollections. I definitely recommend it.”  4 Stars

-- “The book tells the story of the 7th FAOB from its inception till it came home after the war. The author, whose father served in the unit, manages to weave together both technical detail with great storytelling. That's not easy. It also gives us insight into a lesser known part of the war: the role of forward artillery units, particularly those "sound and flash units." These men were highly skilled. Whether they were laying listening devices or peering through a transit looking for a flash of enemy artillery, it was dangerous. They were at the tip of the spear. This would be a great addition for anyone looking for untold stories of the war.”  4 Stars

-- “This is a factual account of the "Forward Observers" or range finders of Patton’s army. These men are most frequently in "no man's land" or enemy territory, in order to determine the position of the enemy guns that are raining down death on our troops. They directed our artillery to the correct target to wipe out these barrages. My brother was one of those men.”   4 Stars