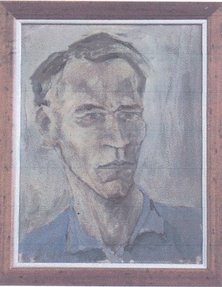 Self Portrait of Lais
One of the main voices of The Iron Regiment is that of IR 169 veteran Otto Lais.   Here is Lais' life story.

Otto Lais survived the war to become an accomplished artist.  In 1981, the Apple Tree Gallery of Karlsruhe published a book that showcased a collection of his works, titled Otto Lais, The Graphic work of Symbolic Realism in the 20th Century.  The book contained a biographic sketch of Lais’ life and work, much of which is summarized below.
Following World War I, Lais returned to the Karlsruhe area where he attended the Baden Art School to study art, composition, violin and piano.  His interests led him to sketching and caricatures, and by 1922, a local paper published a series of his political cartoons, many depicting the relationship between Germany and France.  Lais worked as an elementary school art teacher while also establishing a career as a portrait artist.
Throughout the 1920’s, Lais became a fixture in Karlsruhe’s bohemian, cabaret-sub culture.   This period influenced his artwork, and Lais became well-known for his specialization in the ‘Aktkunst’ (erotic art) realm of etchings, a style which had become popular in the 1920’s.  Between 1921 and 1933, he was known to have produced 100 etchings.  Many of Lais’ pieces took on dark themes of gritty city streets, prostitutes and satanic images, often with his self-portrait in the background.
With the rise of Nazism in the early 1930’s, Reich Minister Joseph Goebbels established the Reichskulturkammer (RKK) ("Reich Chamber of Culture").  The RKK was intended to gain control over the entire cultural life in Germany and promote Aryan art consistent with Nazi ideals.  Lais refused to join the RKK, which, in 1936, led to the Nazis banning public exhibition of his work.  From that point on, Lais ceased commercial art efforts.
In 1935, Lais published a pamphlet of his World War I experiences in the 1916 and 1918 Battles of the Somme titled “A Machine-gunner in Iron Regiment 169.”  Two other books followed that included his 1936 work,  A Regiment Dies a Hero’s Death [1918], and The Battle in the Limestone Chalk [1917], published in 1942.  In all of these publications, Lais accompanied the text with a series of sketches that depicted his combat experiences.
In addressing Lais’ World War II experiences, the 1981 biographic sketch only informs us that he was called back to active German Army service and was discharged in 1945.  Further research indicates he had remarkably distinguished war record in the Wehrmacht.   Lais eventually rose the rank of Lieutenant Colonel and commanded the 858th Grenadier Regiment of 346th Infantry Division.  The 346th Infantry Division was formed in September 1942 and for nearly two years served as an occupation, security and fortification defense unit along the French coast.
Lais’ regiment was stationed in Le Havre when the Allies invaded Normandy on June, 6 1944.  By June 10, most of the 346th Division was fighting in the German counterattack against British and Canadian forces around the Caen perimeter.  The 346th took heavy losses in the Normandy campaign, losing over half its personnel and most of its artillery after the retreat from Falaise in late August.  The division reformed in Holland and fought against Canadian forces in the September – November 1944 Battle of the Scheldt.
Lais prowess as a combat leader in World War II was evident in his being decorated with the highly distinguished Knights Cross of the Iron Cross Award on September 30, 1944.  Lais was one of only four soldiers in the 346th Division who won this honor in the entire war.  Lt. Colonel Lais was captured on April 15, 1945 when Canadian forces overran the 858th Grenadier Regiment in Holland.  The remainder of the 346th Division surrendered to the British north of Arnhem at the war’s end a few weeks later.[i]
After the Second World War, Lais became a headmaster at a secondary school and devoted his time to watercolor paintings.  Today, pieces of Lais’ artwork can be found in fine private collections and museums.
A summary of Lais’ work in a German “Who’s Who“ website article describes a theme of “world-weariness and disaffection," a title of one of his etchings.   Lais’ bio also suggests he displayed traits of a manic personality, where “his sometimes exuberant joy of life mingled with a deep melancholy.”[ii]  It would be an interesting study to examine to what extent the darker themes of Lais art may have been influenced by the many wartime horrors he encountered.  His entire life considered, one has to assume that Lais regarded his teaching and artistic accomplishments, rather than military service, to have been his legacy.
Lais died on March 5, 1988 in Wegbert-Merbeck, Germany, at the age of 89.

[i] References to German World War II service of an Otto Lais come from the following sources: Lais capture by Canadian forces is per Mark, Zuehlke, On to Victory, the Canadian Liberation of the Netherlands, March 23 – May 5, 1945. Douglas & McIntyre, Canada, 2010.   On-line reference to Lais’ combat award from ‘Feldgrau.com, Knights Cross Holders,’ found on http://www.feldgrau.com/KnightsCrossHolders2.
php?ID=3560, viewed December 17, 2016.  Information on the service of the 346 Infantry Division taken from www.axishistory.com, viewed on http://www.axishistory.com/bookstore/150-germany-heer/heer-divisionen/3482-346-infanterie-division; viewed December 18, 2016.  Additional details on the 346th Infantry Division is from the Canadian Soldiers website:   http://www.canadiansoldiers.com/enemies/
infanterie346.htm; viewed December 17, 2016.